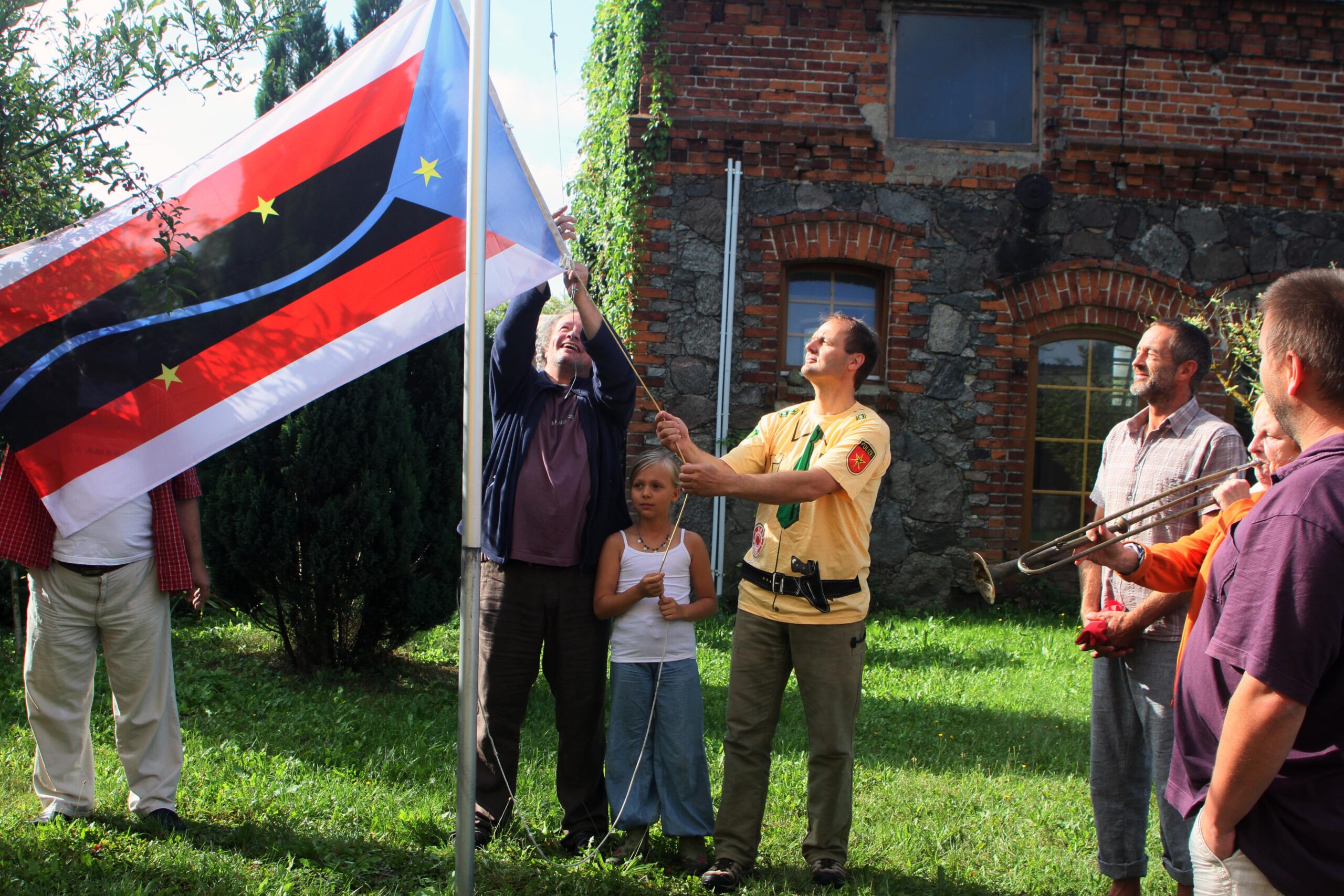 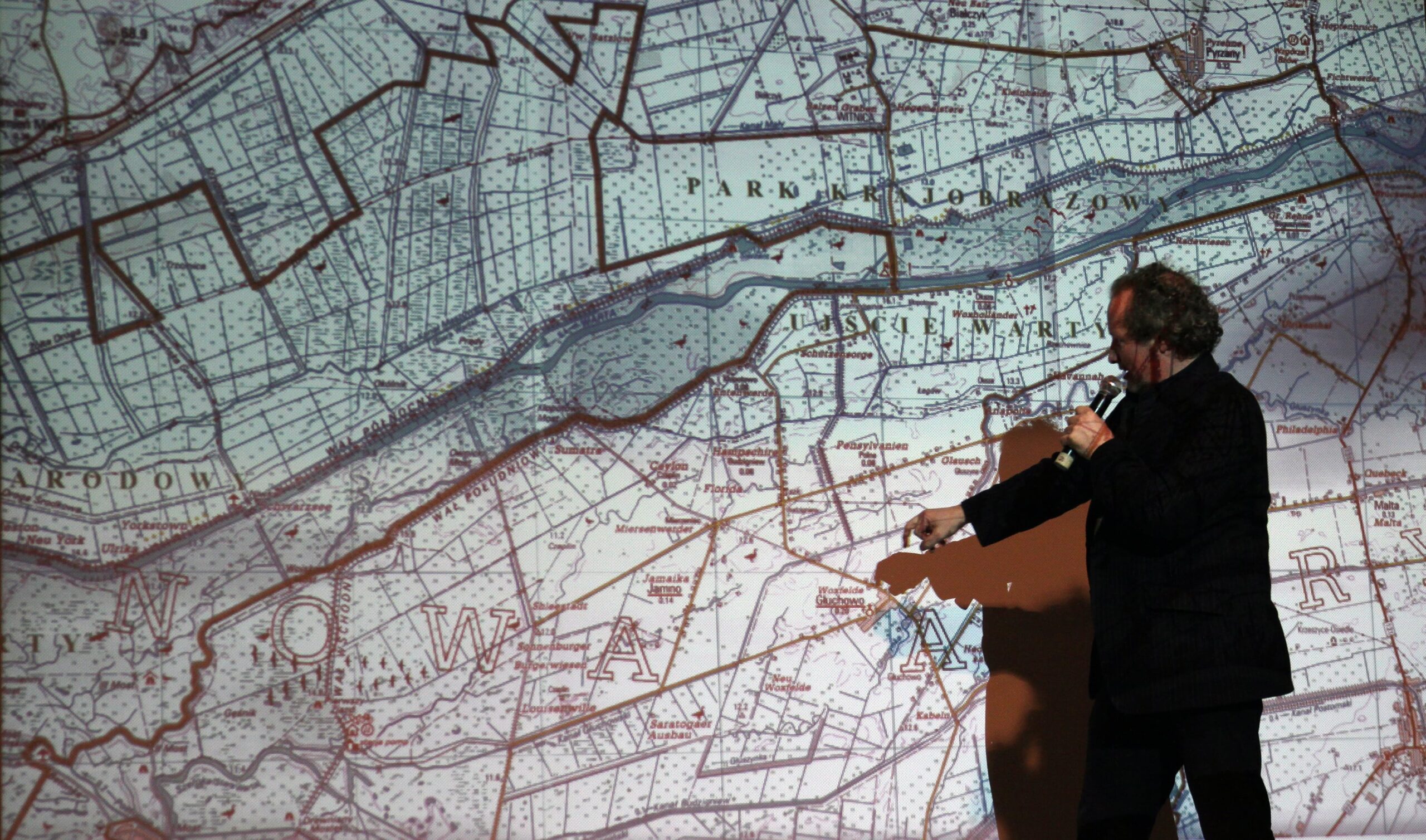 Nowa Amerika is the name of a reality construction that has succeeded in gaining new space on both banks of the river Oder. In the second half of the 18th century, Frederick the Great contributed with the Second Polish Partition to the demise of the Polish state, a political act that is to be condemned. On the other hand, he also managed to gain territory without military force, for example the Oderbruch region. Yet few know that he also had swamps drained in the estuary of the river Warthe by building dykes – thus creating the Warthebruch. He attracted new settlers that were given farms, houses and land. For several generations they were exempted from paying taxes so they felt like real pioneers and the region was officially named New Amerika. New villages with promising names emerged, such as Pensylvania, New Hampshire, New York, Florida, Maryland, Jamaica and Sumatra. On today’s map, some villages have disappeared again and Jamaica became Jamno. Only Malta has remained. This most unusual aspect in the history of the region inspired us to call our newly gained space Nowa Amerika – a borderland united by the separation of the border between Germany and Poland, a land for pioneers hungry for freedom, who want to shape this new area according to civil society values and see it as their promised land. In a clandestine meeting on the 20th of March 2010 Nowa Amerika was founded. It consists of a federation of four states: Szczettinstan, Terra Incognita, Lebuser Ziemia and Schlonsk. Nowa Amerika provides an opportunity for all pioneers with a hunger for freedom to discover the secrets of our four member states and to get to know the local peculiarities and traditions. Come join us on a discovery tour through our new „land“.

The Borders of Nowa Amerika

Nowa Amerika’s borders are fluid. At times our country extends up to Poznań and Berlin, then it contracts again. However, Nowa Amerika’s backbone is formed by the two rivers Oder and Neisse along which runs the German-Polish border. The maps in Nowa Amerika are calibrated in terms of the east-west axis, although the north-south axis is also of interest when experiencing Nowa Amerika’s spatial expansion. Słubfurt is the capital of Nowa Amerika, New Szczettin its metropolis, Las Forst the gambling den, Zgörzelic our open-air museum, Musknica our park … and the rivers Odera and Nyße our passion. In addition to German and Polish, Słubfurtian plays a major role in people‘s everyday lives. As Nowa Amerika is still a young country it needs your help too to grow and prosper. Its size depends on the number of people who believe in Nowa Amerika. 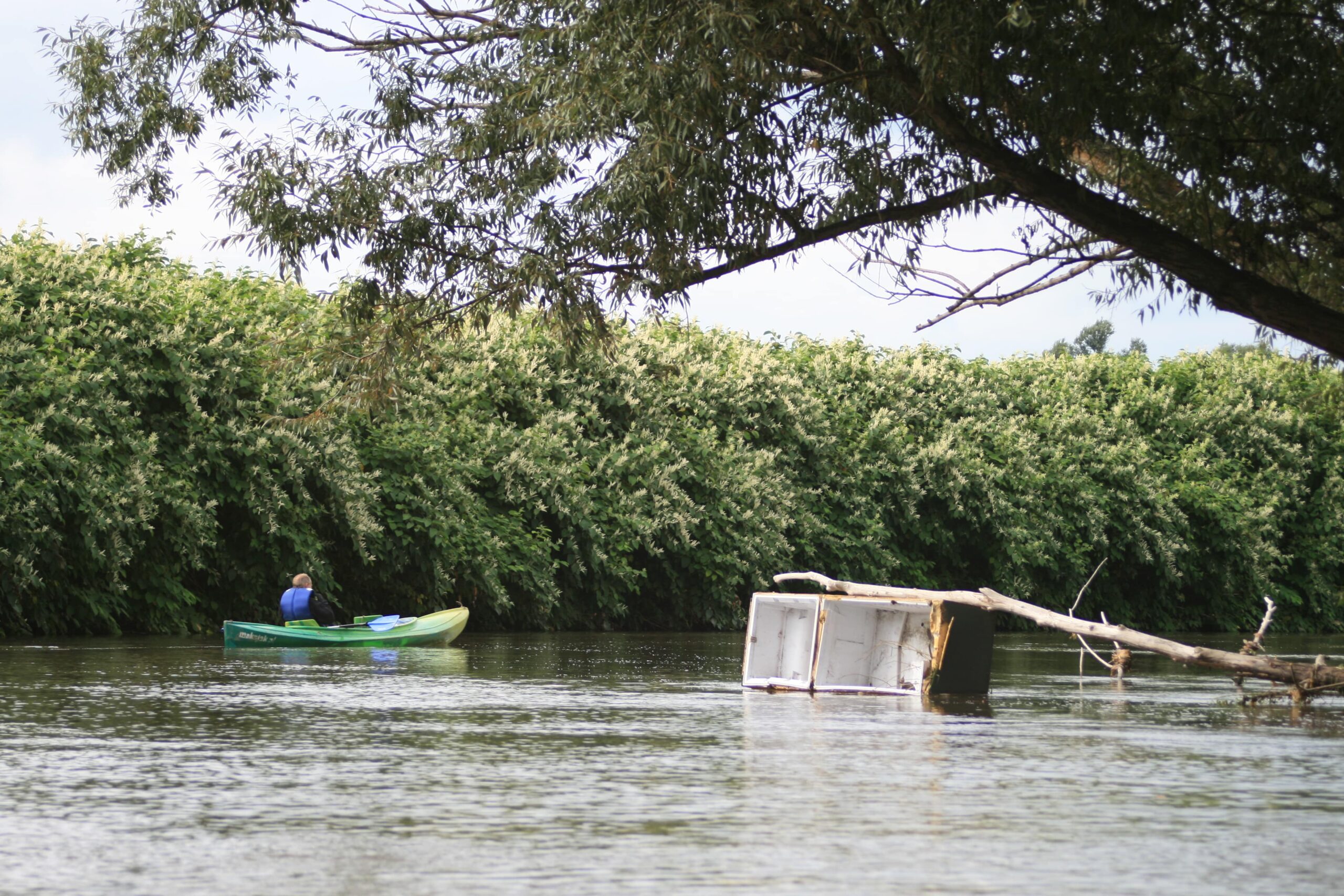 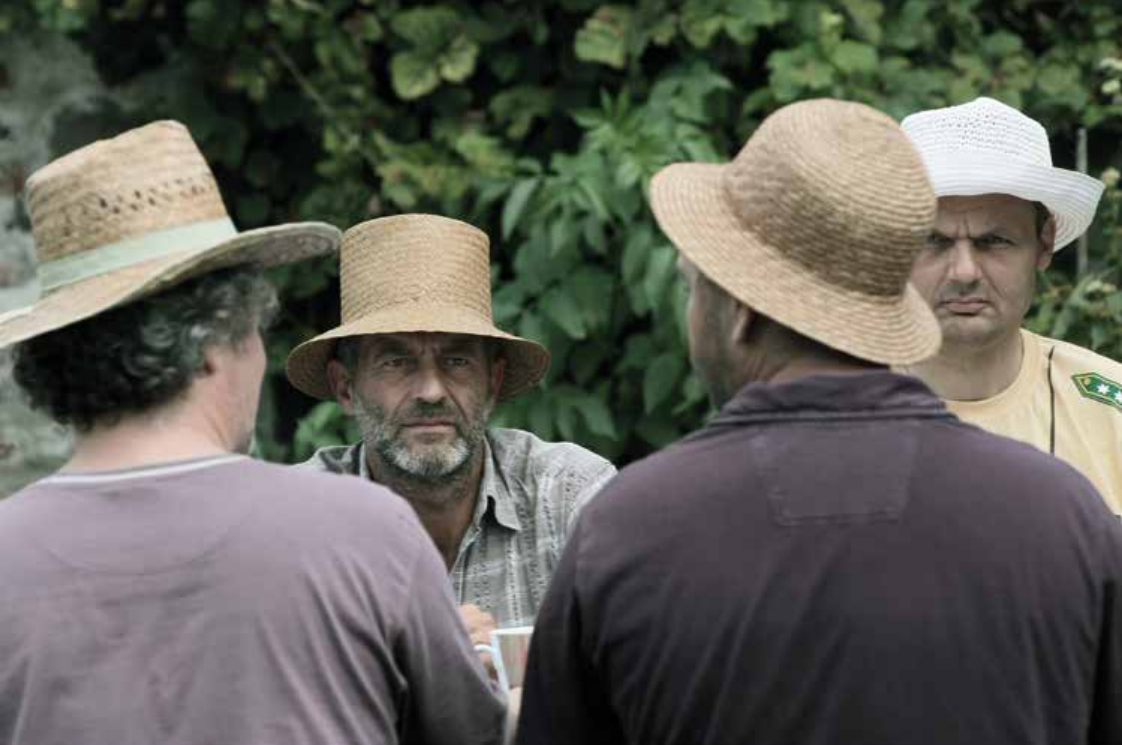 Following World War II the Allies restructured the political map of Europe. Although Poland already was one of the most severely affected in the war, Stalin enforced a massive shift of its borders from east to west. Polish territories in the east became part of the Soviet Union (Lithuania, Belarus, Ukraine). In exchange Poland received formerly German territories located in the west. The result was one of the biggest population migrations of the 20th century. Poles living in the eastern „Kresy“ territories were forced to leave their homeland and were re-settled on territory that used to belong to the eastern parts of Germany. The Germans living there had to leave in turn and were forced to trek westwards. It was then that the Polish government was confronted with the problem of how to deal with the German city names, their architecture and the German cultural heritage. The solution was to go back to the times of the 10th and 11th century, when the territory was settled by the Piasts – the founding dynasty of the first ruling Polish dynasty. In Warsaw a commission was set up to deal with the name changes in the regained territory (Komisja do Spraw Nazewnictwa na Ziemiach Odzyskanych) that was to change all formerly German city names to Polish ones. Some names were literally translated. Grünberg became Zielona Góra. Some were phonetically adapted: Stettin became Szczecin. Others yet came to honor the Piast dynasty like Bärwalde, which became Mieszkowice, named after Mieszko I., the first Piast king. Today, his statue adorns the city’s central square. Incidentally, the Nazis acted in much the same way when topographic names were thought to sound too Slavic to them. This is how the village of Tzschetschnow near Frankfurt (river Oder) became Güldendorf, and is still called that today. In order to facilitate an easier identification of its citizens with Nowa Amerika our government installed the Commission for Name Changes on Nowa Amerika Territory that is currently busy renaming cities, villages and streets in the territory of Nowa Amerika. 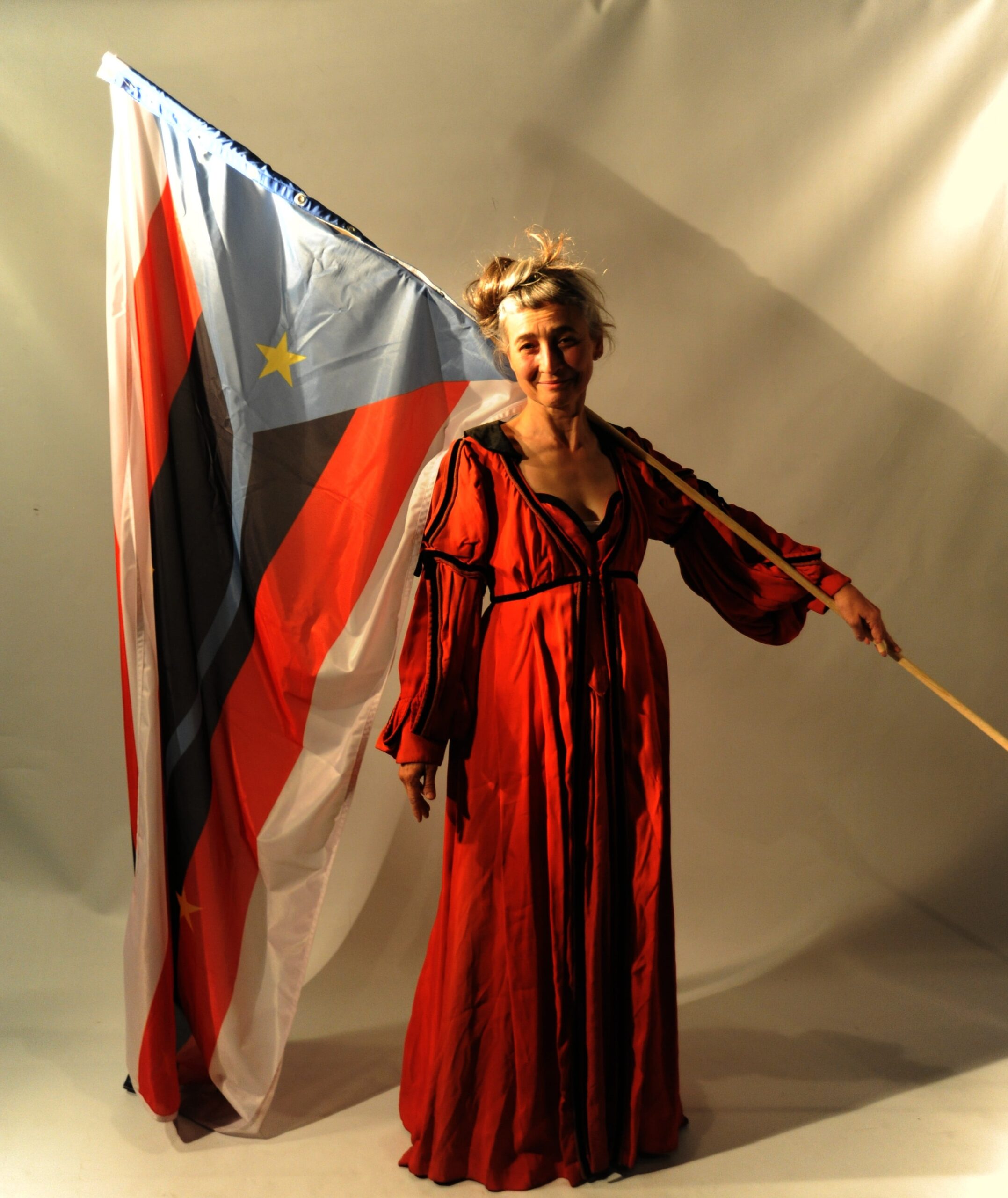 Since the 10th century Sedina (from lat. sedinum – the exemplary one, model, ideal one) served not only as an allegory of the city of Szczecin, although this is what it is most often associated with. Sedina was the wife of Johannes Scolvus, the man who might have been the first to discover America. Sedina is also one of the deities in Triglav’s (the three-headed god) pantheon and throughout the Middle Ages she was present in Christian iconography. She protects the weak and the strong, is the patron of artists and anti-artists, Amazons and machos, and she is the first VIP of Nowa Amerika. Sedina has many faces. Most women and almost all men of Nowa Amerika identify with her (the male form being Sedin). She is the star all Nowa-Amerikans dream of. Everyone can become Sedina or Sedin! She is a dream that may come true at any moment. There is even the Sedina Institute which conducts research on her. The institute is responsible for the reconstruction of the West Pomeranian Contemplation Chamber; it has restored the Sedina chapel in Szczecin’s most beautiful villa, the Lentz villa, reconstructed the mobile Sedina altar, and organizes the common Sedina seances, where contacts with the spirit can be made. Sedina is the patron of Nowa Amerika, with her portrait adorning the country’s stamp.

Everybody can become a Nowo-Amerikan. It is sufficient to pledge your allegiance to Nowa Amerika and its constitution regardless of where you are from. Applying for an ID card counts as adequate evidence of your allegiance. It is therefore sufficient to complete the digital application form on our website and attach a photo of your choice. Then the form is sent to one of our state-run printers and from whom you can pick up your ID card for a fee of 2€ (8zł). You need to validate your new ID with your signature when you pick it up and you will then become a proud citizen of Nowa Amerika. 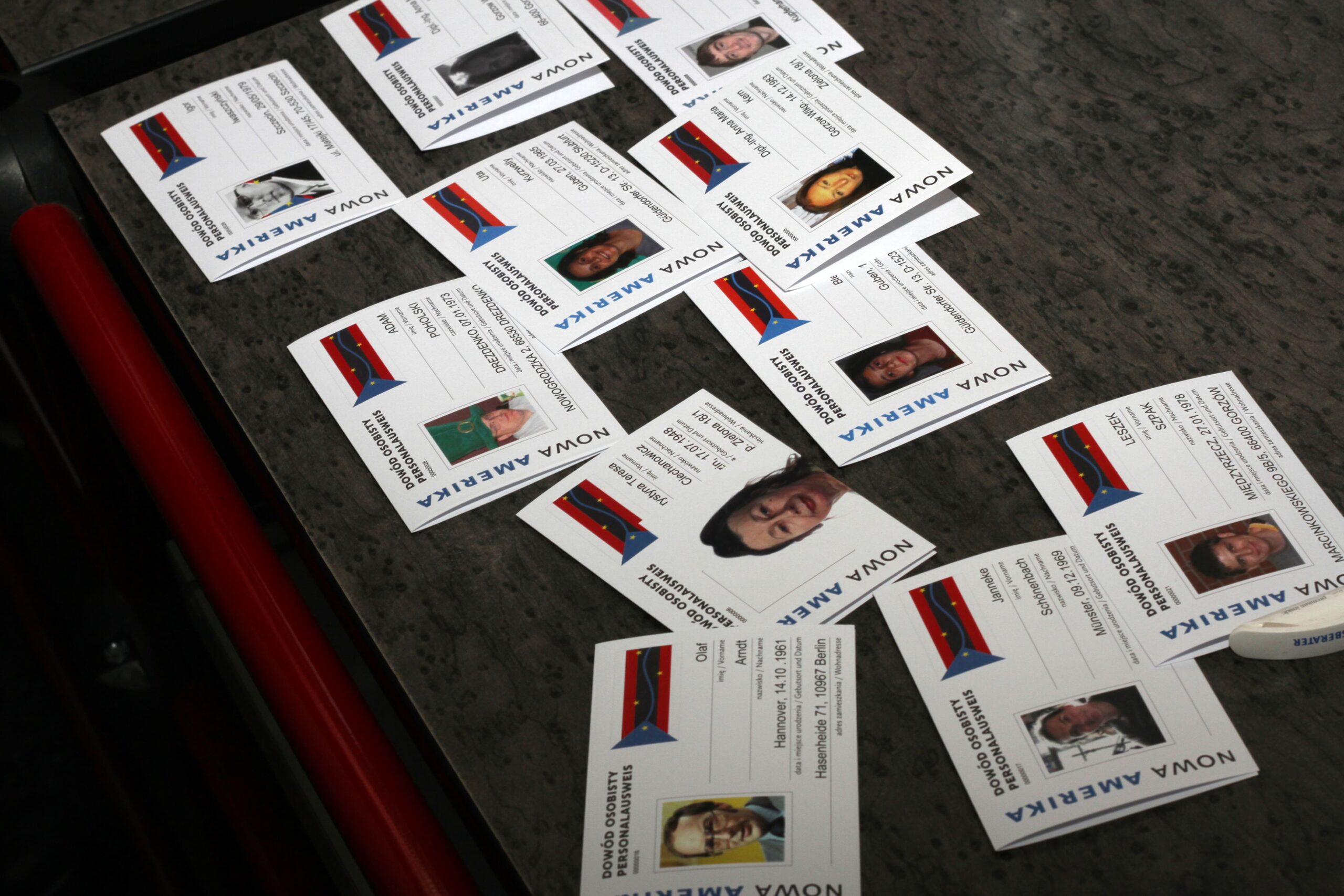 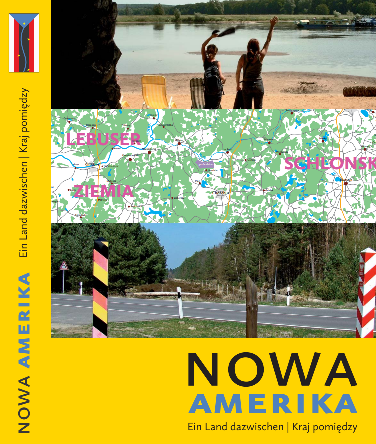 Every vacuum cleaner and every domestic appliance comes with instructions for use. Often these are not consulted and if they are, they are usually difficult to understand and are thus immediately put away. In our case things are different – if you don’t read the instructions you might put this book aside because it may not seem to make much sense to you. We are so used to buying into the reality that we are given by others. We might long for a better world and dream of other worlds when reading fantasy fiction but most of us are quite unaware that we actually create our own world. Let’s assume that reality is a construction that we construct by means of our senses and communications with each other. We construct our own small or larger stories on a daily basis, consciously or unconsciously. In this way identity is formed. Some stories are passed on from one generation to the next and accepted without further reflection. Sometimes stories serve to reflect power relations or to seduce us. Stories can also serve to open up new spaces for thoughts and actions, remove the boundaries in our heads and start new relationships. Nowa Amerika is such a space. Here are the Germans, over there are the Poles – this dichotomy no longer exists in Nowa Amerika. We are Nowa Amerikans with post-Polish, post-German and many other migration backgrounds. We have founded a new space in the space between the two and this new space removes the dialectics between two national societies. As Nowo Amerikans we are bound to this common sense of belonging and thus we no longer participate in the German-Polish act of shaking hands. We invite you to visit our beautiful country and to experience it with your own eyes. Come play with us, be serious about the game and perhaps you can add another building block to the construction of Nowa Amerika.