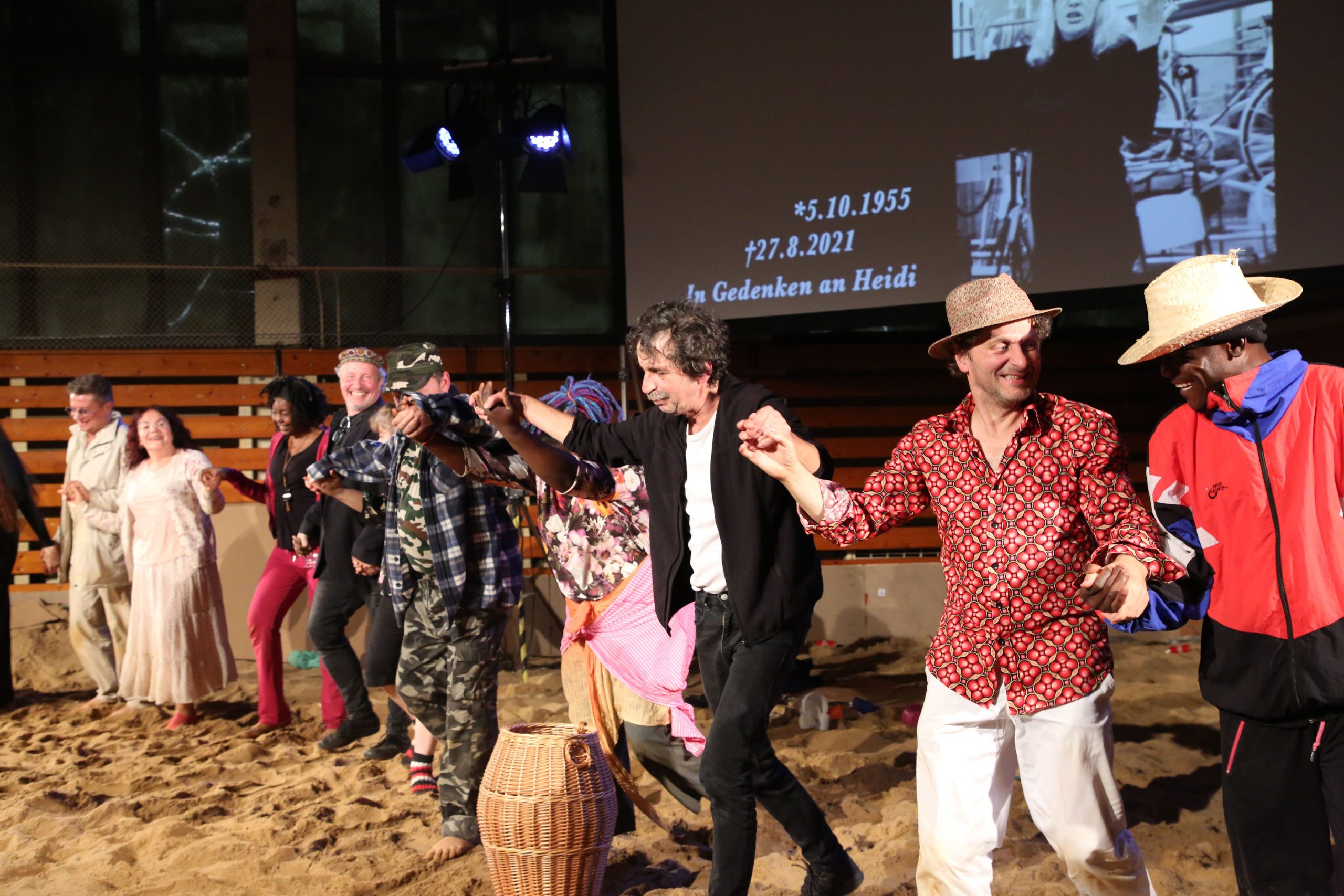 Słubfurt 2030. The future is now. Coming here from all corners of the world, the new Słubfurters bring with them their experiences, patterns and perspectives for a today. A scenic installation explored this utopian island in the sea of Nowa Amerika. For now. And here. Future is welcome. The production emerges from the migrants’ world of experience and develops scenic structures and visions from it, which become a new world of their own.

Rehearsals began on 03.05.21 with a concept rehearsal with the performers Elena, Heidi, Richard, Fatemeh, Bijou, Wojtek, Dorothée, Mohammad, Ibrahim, as well as Roksana and Wolfram as performers and musicians, the dramaturge Matthias Wolf, the assistant director Matthias Hille, Michael Kurzwelly as artist and project manager of Brückenplatz, and director Thomas Roth. It was agreed to undertake a theatrical journey with the ensemble, to examine what they have taken with them from their flight to Europe and what influence these imprints have on their wishes for their new home. From the very first rehearsals, movement training with Matthias Hille and the dancer Bijou played a major role. An alert body produces good ideas. In addition, they worked with signets from the Migrantas group, which the players could expand to include their personal experiences. Theatre improvisations, the basics for a role design were developed. In a long process, we rehearsed twice a week for 4 hours each time. Two intensive workshops on long weekends served to focus on the slowly developing story. A boat was created with fugitives who struggled with the forces of nature and rescued themselves to a stand. Here the question of a stage set became relevant: It was decided that all scenes would be based on the sea and sand, the beach was formed from a large area of sand and cork granules. There, a shady figure was already waiting for them, who seemingly helped them, promised them a tent and a multicultural festival and appointed one of the migrant women as their deputy. In the course of the production, it turned out that he was only looking for victims for organ trafficking. But the fugitives fought back and fled into the desert. On a long march in fear of the border police and other dubious traffickers, they found in an abandoned oasis the remains of a project that had taken care of migrants and refugees – the Brückenplatz | Plac Mostowy in Słubfurt (Frankfurt/Oder). Jan Poppenhagen’s video compositions of the work showed paths and activities and for the refugees the question arose whether they wanted to tie in here or develop something new. With this moment, the production touched on one of the central questions of Brückenplatz | Plac Mostowy: Where do we go from here? The question is highly topical, because the Brückenplatz site is threatened by construction plans of the city of Frankfurt (Oder), even if the situation has eased somewhat due to a cancellation of the planned investor, the question of relocation and reorientation remains of current relevance. A question that was passed on to the audience in the three well-attended performances (the premiere was on 25.09.21 for the Festival of Diversity). Michael Kurzwelly developed an installation in which the participants from Brückenplatz introduced themselves in videos with short musical contributions. This installation was on view for a month and was also shown at the beginning of the production, announcing the project and taking the questions raised beyond the end of the production. Roksana Wikaluk and Wolfram Spyra, among others, played an important role and contributed to the success of the production as performers, musicians and sound artists. We would like to emphasize the good technical cooperation with the Kleist Forum Frankfurt (Oder), which provided us with excellent technical support in the form of lighting technology, and the construction of a grandstand for the audience. Two performances were shown as part of the Kleist Festival. Working with amateur actors from Brückenplatz was not easy. So there were fluctuations at the beginning. Some participants only realized in the course of rehearsals that developing a play is time-consuming and demands a lot from everyone. So some left the team, others joined. One lay actress still took part in June, but then died of a serious illness. All in all, the joint intensive process has welded the participants of Brückenplatz together. 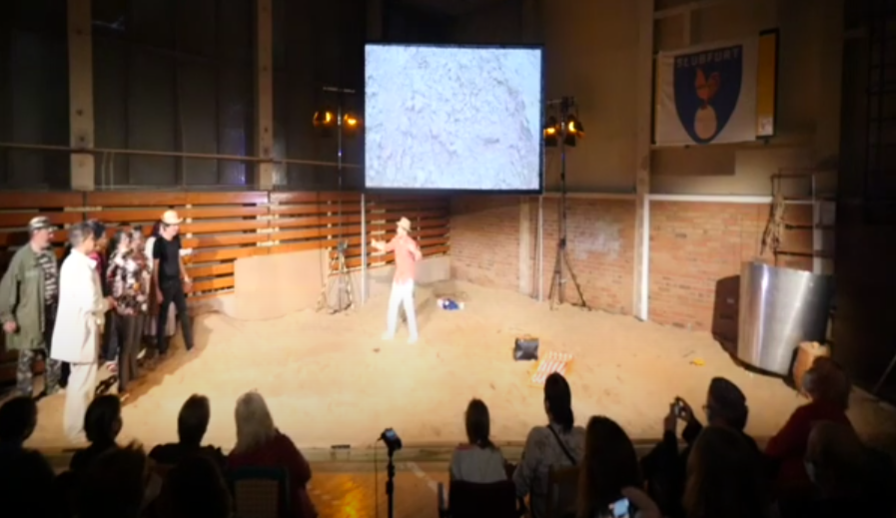 The Słubfurt project and association has been in existence since 1999. As a cross-border artistic-civic laboratory, it reinterprets the two cities of Frankfurt (Oder) (Germany) and Słubice (Poland) into the joint cross-border city of Słubfurt.
In the process, new frameworks are developed again and again, which are filled and realised by the participants with their own ideas. For example, the “Słubfurt Parliament” was created in 2009, the “Słubfurt Media Library” and the “Brückenplac|Plac Mostowy” (since 2013).
Since 2014, many new citizens from Syria, Cameroon, Afghanistan and other regions of the world have enriched Słubfurt and the Brückenplac|Plac Mostowy: as a laboratory and model city for a society beyond the idea of the nation state.
The association Slubfurt e.V. has 45 members from different professions and cultures. The founder and initiator is the action artist Michael Kurzwelly, who in 2019, on the occasion of the 60th anniversary of the Basic Law, was honoured by Federal President Frank-Walter Steinmeier with the Federal Cross of Merit on Ribbon
for “a German-Polish network of civic engagement that intervenes in social and political processes through creative participation.